This post is the follow-up to my previous one about my trek to Gaziantep, a city in Southeastern Turkey famed for Turkish cuisine.  That post focuses on savory meals like kebabs—- so if you haven’t checked that one you can read it here: Gaziantep: Into the land of the kebab

There are two major desserts in Gaziantep: Katmer and Baklava.

Katmer is made by taking a piece of hand rolled and stretched yufka (the Turkish version of phyllo dough, made with olive oil instead of butter) and filling it with a thick layer of ground pistachios and kaymak (Turkish clotted cream) then baked in the oven until everything gets a bit melty inside and the outside is flaky and golden brown.  The best Katmer Salon is Zekeriya Usta. The Katmer are as big as a large pizza…huge, enough for 4 people. That’s why…even though we were in fact 4 people…we always ordered 2 of them. Of course. 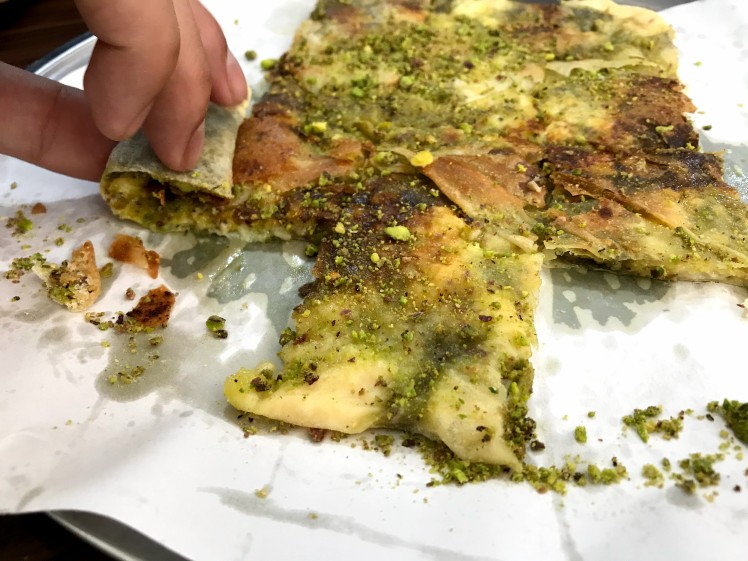 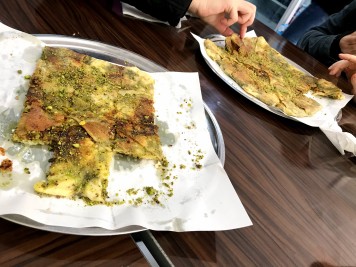 They are I think my favorite Turkish dessert…well…actually that’s a hard call, but they are up there on my list. They are sweet but not too sweet. They taste really nutty from the pistachios and are a bit salty… but the cream balances them out to be more mellow.  Think of like a flaky croissant type dough exterior with nuts and cream inside all gooey and drippy.  Mind you, when i say ‘cream’ this is not to be confused with pastry cream or sweet cream that has sugar added to it.  This is just fresh thick curdled cream…milky and rich. Over the course of our 2 day trip we ate 7 katmers. Yes. We did.  This is true.  I am not ashamed. 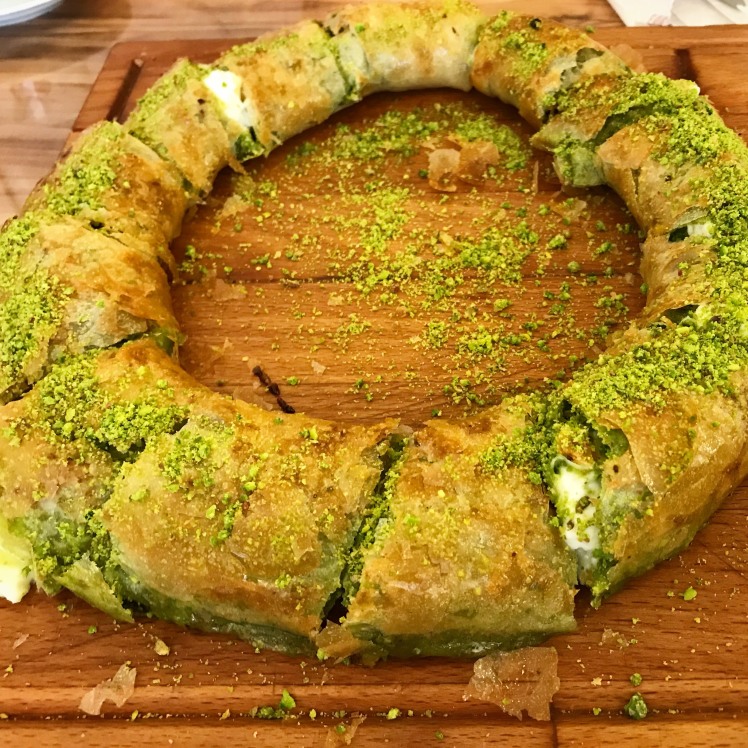 Also on this trip, for the first time ever we sought out the Simit Katmer…a rolled version of katmer, found at the famed Akşam Simit Katmer Salon.  This is made from nearly the exact same ingredients but instead of laying the yufka down into a flat square, it’s rolled up into a ring, imitating the Turkish bread ring called ‘Simit’.  The rolled style gives it more crunch on the outside with more squishy softness inside…like how with a cinnamon roll the inside is soft and gooey (and usually the best part, who cares about the outside right???). My friends still preferred the original katmer best but I dunno…I was having a hard time (and still am) making a choice. They are both so good…and while similar are so different in texture.

Aside from it’s call to fame for spicy kebabs Gaziantep is also, according to lore, the ‘birthplace’ of baklava.  Now this is quite a controversial statement as baklava is fought over between many cultures and cuisines.  Not being one to want to enter into food politics, especially something that has been argued for hundreds of years, here is what I do know: In Turkey, it’s known that the style and traditional way of making baklava came from Gaziantep.  Regardless of where the tradition began, the level of deliciousness of Gaziantep baklava cannot be negated. Baklava can be found all over Turkey and there are many famous shops in Istanbul claiming to have ‘Gaziantep Baklava’. Really it is always good and I can’t say that I’ve ever had ‘bad’ baklava.  Can you go wrong with dough, nuts and sugar? But there are different levels of just how good the baklava can be. In Istanbul, the best baklava place is hands down Karaköy Güllüoğlü, who state they use the ‘traditional Gaziantep recipe and art of baklava making’. Therefore, when you are actually in Gaziantep, the quality and level of baklava is so good it’s mind-blowing.

Each piece is stuffed bursting open with pistachios, turning the little dough packages green in color.  In Istanbul, to get the quality with that amount of pure pistachios and as large of a piece of baklava, you would pay maybe 3 times as much as what you pay in Gaziantep. There are of course famed places and people who will argue with you into the hours of the night about which Gaziantep Baklava Bakery is ‘The Best in Gaziantep’. There are people who only buy from their particular stores and won’t step foot into any other. Baklava in Gaziantep is so famous and beloved that in the more popular shops, entire walls of baklava will actually sell out completely each night, packed in vacuum sealed boxes and taken by the kilo home to eat or put onto buses or in suitcases on planes, bound for future gifts to people who live outside the city. 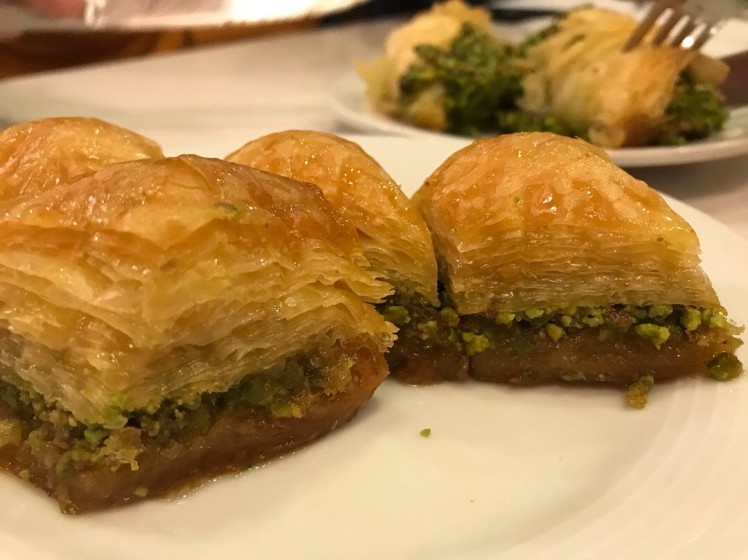 As you read this, are you starting to slowly comprehend now what I was alluding to in my previous post about the ‘Baklava tale of woes’ ?  I am trying to hint subtly at the fact that baklava stores DO sell out of baklava. And that’s what makes my trip a tragic comedy.  You see, if you haven’t guessed it, the stores (yes plural, stores) DID sell out. But even more tragic: it was my fault.

Locals may argue over which Baklava Salon is THE BEST, but a usual favorite is Koçak.  I also, having been to Gaziantep several times, firmly believe that Koçak is in fact THE BEST. So, fast forward to the Sunday evening the night of our flight.  We had already (thankfully) had a feast of baklava at Imam Çağdaş the night before.  Imam Çağdaş really doesn’t do anything wrong, and their baklava is amazing.  It’s a close second to Koçak…only Koçak is just a tiny bit better. So anyways, it’s Sunday, we have a few hours before we need to head to the airport, and all of us in our travel group have dreams of bringing baklava home with us.  For some of us it was for work, some for ourselves, and for one person for her boyfriend’s grandmother who requested it.

We arrived at the nearest Koçak…a small store only showing a few of the baklava styles. I didn’t see my favorite style on display and when we inquired we were told they only had the ‘traditional’ left.  There’s nothing wrong with the traditional, in fact, with nothing to compare it to, you would think it’s so good it’s a crime. But I HAD TASTED others before and I wanted the other style. Plus, I don’t know what came over me. I just didn’t believe that this famous store, with so many locations, didn’t have their other styles.

The waiter promised us that even at their other stores they also didn’t have anything but the traditional, that they were all sold out.  I didn’t believe him. I could not be told. So…with a stubbornness I had not realized I possessed, after we all ate one piece of traditional baklava, the square one with pistachios, I made us all get up and walk over to the other Koçak.

As we neared the building, we saw tour buses lining the sidewalk. We then saw people with open suitcases in the parking lot stuffing gigantic boxes of baklava into these suitcases. Then a man from the Koçak store came out and very pleasantly smiled and said ‘I’m so sorry. All the baklava is gone. It’s all finished.”

So, we walked back to the store we had just left, determined to get boxes of the traditional I had turned my nose up at.  And what did we find? As we walked up the steps, the very waiter who had told me to buy the baklava from there looked at us with deepy pity as he said ‘It’s all gone.  The people after you bought the last of it.’

It was cruel twist of fate.

SO, we jumped in a taxi and had the driver speed us to Imam Çağdaş to buy their baklava…as I said, it’s a close second.  Only…as we entered the store…the wall filled with thousands of squares of baklava normally… was… EMPTY.

They too were sold out.

At this point, I felt like the worst person on Earth.  My friends found all of this hilarious and were laughing and becoming hysterical.  They are truly good human beings. I will never forget their kindness because, truth be told, I’m not sure I would have been laughing if the tables were turned.  We eventutally did find some baklava to take to the boyfriend’s grandmother…but it was still an eye opening moment.  It was a valuable lesson in life about myself and about food.  Who knew the whole town sold out of baklava after 7 p.m. ?  Who knew that busloads of people would buy busloads of this delicacy?  Can I blame them?  Absolutely not.  I would have done the same if my luggage weren’t only 8 kilograms because we bought the cheap flights.

But here’s the biggest lesson I learned, a metaphor applicable to life in general: when you see baklava, get it and eat it while you can, enjoy it in the moment and don’t waste time walking to the other stores (or just believe the waiter when he’s trying to caution you that they are selling out).

This site uses Akismet to reduce spam. Learn how your comment data is processed.