THIS is everything to me right now. I’m dying in this heat and the only way to escape it is to fill a bowl with this and slurp up as much as I possibly can. However, the hilarity that this particular food is the only thing I want to eat is not lost on me. You see, I have a confession to make: my first 2 years that I spent in Turkey, I avoided this cold yogurt soup- or really all watered down yogurt in general-at all costs. While I completely respected that this was a beloved favorite among many, I just couldn’t do it. Before coming to Turkey, the only yogurt I had ever eaten was the sweet ‘fruit-on-the bottom’ stuff….and I was not a big fan. I’d never been a big yogurt eater in general, something about the texture really bothered me.  Then, suddenly I was in Istanbul and it seemed that everywhere I looked there was yogurt and this yogurt wasn’t even fruity.

I later learned that yogurt is very important to Turkish culture, the actual word ‘yoğurt’-‘yoghurt’ when looking up the etymology is an original Turkish word dating back to the 16th Century(or possibly even earlier). Here it’s eaten plain or served on top of spicy kebabs, or as a drink with meaty meals. In fact, the national drink of Turkey itself is ‘ayran’,  which is yogurt mixed with salt and water. I was recently talking with a friend here about the cultural differences of yogurt. Her response was: “Yogurt is a meal in itself, you can’t eat it just for breakfast- sweet yogurt? No!” Here, it’s a vital and respected food just on its own.

However, when you spend your whole life learning food in one way, it’s hard to train your brain to see it in a totally different way. I couldn’t get past what I thought yogurt should be, on top of that, I’d never really liked it in the first place. The thought of a yogurt soup was something I just couldn’t fathom.  These days savory yogurt is becoming more and more popular in the states as with items such as the Greek tzatziki and the popular lassi in Indian cuisine. But at the time, I still was not convinced, kindly asking waiters to leave it off my plate- much to their own horror! Then, one really hot summer day, I decided to be brave. A friend had ordered cacık(pronounced jajek), the cold cucumber yogurt soup. I boldly ordered it too, preparing myself for the worst.

When I think back to this moment, I think about a Patsy Cline song where she painfully sings out “I’ve been soooooooooo wrong, fooooor soooooooo long”. That was me, feeling about as emotional as Miss Patsy in that song because I realized all that I had been missing out on. Yes, this was yogurt. No- there wasn’t any fruit. But it was DELICIOUS! It quenched my thirst, made me full, and had so many of my favorite foods rolled into one: garlic, mint, and cucumbers! Once this door had been opened, it was like rediscovering Turkish food all over again. How had I denied myself eating yogurt on a kebab?!! How had I been so blind?!! I had clearly been the victim of my own stubbornness, refusing to be open minded, for which I promise I am ashamed of! After this, I began experimenting with yogurt on everything and I even grew to love and drink ayran; however, always attributing cacık to be the yogurt vehicle that taught me to embrace this food tradition.

In the dead of summer, cacık is the best thing on Earth to eat. It’s cold, refreshing, and extremely filling. It is indeed a whole meal.  Read on if you like for recipes and pictures, and as always, Afiyet Olsun. 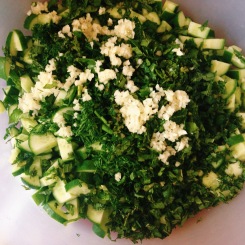 *Again, I don’t have a traditional recipe, but one that I tried to perfect myself by eating lots of it and asking friends.  I was really struggling to get the flavor right and recently received some tips from some amazing women here (THANK YOU ‘J’ and ‘M’).  This is how I like to eat it, but some might prefer it more watery.

Ingredients:
*8 small cucumbers (the Turkish ones are small, so this would be like 2-3 American ones)
*4 cloves of garlic
*1 tsp. salt
* a large handful of fresh dill
* a large handful of fresh mint
*1/4 cup good extra virgin olive oil
*3 cups yogurt (I used the full fat ‘kaymaklı‘ one, this is close to ‘Fage Greek 2%’ yogurt)
* 1 and 1/2 cups water
*juice of half a lemon

**Chop the cucumbers into half inch pieces and put them in a bowl.  Mince the garlic, chop the dill and mint, and add this to the cucumbers.  Add the yogurt, water, olive oil, lemon juice and salt to the cucumber mixture and stir well.  You can add more salt or a dash or red pepper flakes here.  You can also add more water if it’s not thin enough for you.  Cover it and refrigerate for at least 1 hour to get cold.  When you serve it, you can add a drop of olive oil and on top and sprinkle some dry mint.  Enjoy!