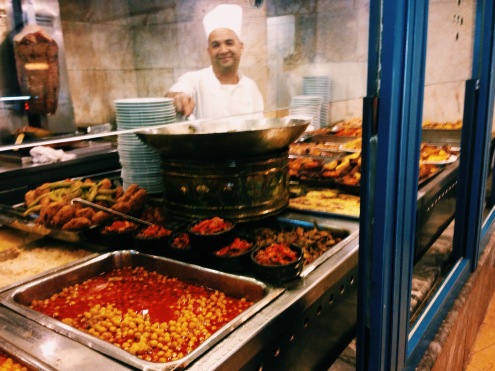 Meat, potatoes, rice… who couldn’t be happy with these?

On the Asian side of Istanbul, in one of the oldest neighborhoods named Üsküdar, and right in the middle of the busy center is an amazing restaurant originally established in the 1930’s-that until this past Saturday, I had never once stepped foot in.  It’s not far from my own neighborhood and my Turkish friends have been telling me about it for years.  You see, my friends know how I feel about food.  I once booked an entire trip to Gaziantep, a city in the South East of Turkey that is arguably the birthplace of many kebabs and also baklava, for the sole purpose of eating as much as possible.  I did a similar ‘food quest’ to the Black Sea villages and also the old city of Antakya.  Yet I had never gone to this place so easily accessible and within reach.

After yet another food ‘trek’ around town last week, one of my closest friends here in Istanbul had had enough of my wanderings when there was an amazing place right under my nose, as he let me know with :”You have gotta go to Kanaat!  Come on!”  And so, there we went, to Kanaat Lokantasi.

The best way to describe the food here is TURKISH COMFORT FOOD.  If you’ve ever wondered about traditional Turkish food, you probably know about kebabs, but what’s offered here at this restaurant is another facet of cuisine that is very well-known among locals but not something really known outside Turkey.  This kind of food is called ‘ev yemek’ in Turkish which means ‘home cooking’ and that’s exactly what this is.  It’s as if you sat down at your auntie’s or neighbor’s house for dinner.  Some of the dishes are incredibly simple and others are some of the most difficult and labor inducing ones to make.  It’s a restaurant that while next door offers Burger King, this one is still serving timeless dishes.  The atmosphere is clean and bright but you don’t go there to sit all day and spend hours.  The waiters are even semi notorious for being brisk.  You go there to do one thing: EAT.

My friends explained to me that this particular restaurant was an ‘esnaf lokantası’ meaning that it was traditionally the local place serving food to all the workers in the shops nearby.  Open from 6:00 am to 11:00 pm, its hours are for the people working all day who want something cooked the way mom does to eat on their break.  The food is prepared and ready to go, you order up at the counter, and while everything is fresh that day it’s readily at hand to the people of the neighborhood.  In this way you can have an amazing home cooked meal on a tight schedule… in a sense, the original ‘fast food’ of much better quality than what we call fast food today. 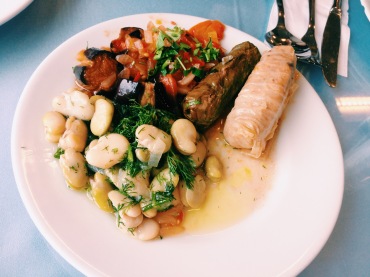 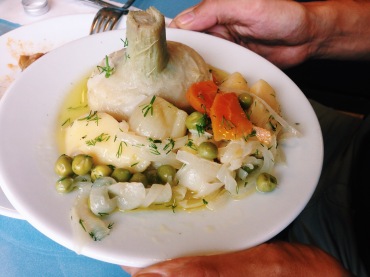 Nearly everything served here is a classic, traditional dish stemming from Anatolian or ‘Ottoman’ roots.  You have the ‘zeytinyağlı’ dishes that are vegetables prepared by being slowly cooked with olive oil and lemon juice.  There are the vegetables with meat, the ‘etli yemek’, such as spinach or leeks sauteed with tomato paste, onions, and ground beef.  There are also heavier smoked eggplant kebabs and various froms of ‘pilav’, Turkish traditional rice.  The yogurt served here is homemade and thick.  Also, SAVE ROOM for desserts: to name a few, the traditional puddings ‘sütlaç’ (rice pudding) and ‘aşure’ (a complex pudding translated into English as ‘Noah’s pudding”- yeah Noah like from the ark- that celebrates harvest times).

When I think about the fact that I had never eaten at Kanaat before this past weekend, I’m shocked.  I pride myself on knowing good restaurants, how had I missed this?  After pondering on this long and hard, I think it’s because this is actually the kind of food that I eat all the time.  Zetinyağlı  food isn’t new to me having learned how to make a few myself, and the rice and meat dishes are regular options prepared and served for lunch at work.  To me, this is ‘home cooking’ and something I might not normally seek out at a restaurant.

However, what sets the food at Kanaat apart is the quality.  Everything here is clean.  Nothing is too oily.  The ingredients are very fresh and everything is done just right.  Here is a place where you always know what you are going to get.  There aren’t surprises and the menu isn’t going to offer any wild cards, but the food is something you can depend on.  If you are working hard and only have 1 hour during lunch to grab food, what choice would you choose: fast food french fries or home cooked traditional foods?  I think the answer to that is easy.  My Turkish friends know this place because they remember it from their own childhood as the reputation of this place is historical in itself. In Istanbul, Kanaat remains a constant for food in a city forever in flux and movement. 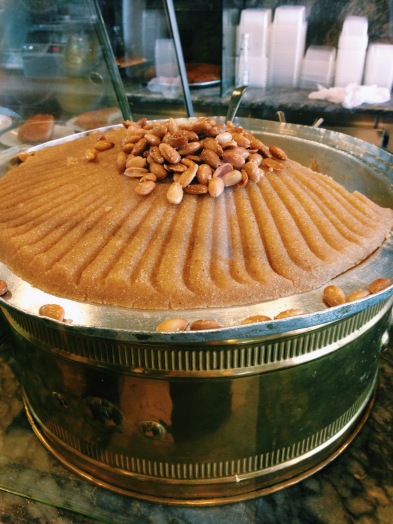