Two years ago, I took a trip down to Turkey’s southern region of Hatay specifically to see the historical city of Antakya, or Antioch as it’s called in English.  It’s claimed by historians that Antioch was actually the first place where Christians were given the name of “Christians” and called so by others.  It is also said that St. Peter himself set up the church there in Antioch.  Today the actual city still lies within the original Roman city walls and St. Peter’s church carved into a rock cliff is still there.  Being an enormous history and architecture fanatic, I really wanted to see this place and visit the historical sites…what I had not expected however was some of the best food of my life, and an other- worldly experience with HUMMUS.

Everybody knows and loves hummus, it’s become a super trendy food in the states and you can buy huge tubs of the stuff in nearly every grocery store.  You can even buy hummus made from beets or edamame or avocado.  The thing is, living in Istanbul, I can’t very easily just go and buy hummus from the store.  It’s not really a traditional food.  You can find it here and there and occasionally it will be on the menu in a few restaurants, but it’s really not a typical meal.  However, this is not the case in Antakya.  It’s on the menu in every restaurant and is a staple of their daily cuisine, even serving it up for breakfast.

Located very close to Syria, Antakya was very important throughout history for its pivotal role in trade with spices and goods, as part of the famed ‘Silk Road’ trade routes.  It was originally inhabited briefly by Alexander The Great before being a part of Byzantium and later the Ottoman Empire.  The region has always straddled both Syrian and Turkish cultures and most of its citizens speak Turkish and Arabic. Therefore, although still within Turkey, you feel almost as if you have traveled to a completely different place, stepping back in time-of which the food has a distinctly different flavor than that of Turkish food in other areas.  This food tends to be seasoned with much more spice and heat, and many things that are typically more Middle Eastern dishes can be found as local dishes here.  This makes sense as to the importance of hummus here in Antakya- a food probably brought to this area along the Silk Road establishing itself as a favorite among its people. 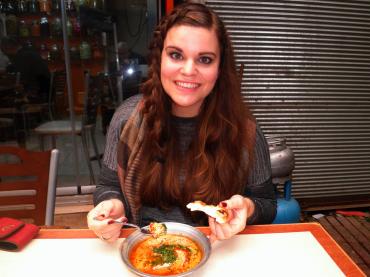 Inside the Bazaar, at a place serving hummus all day long

As all food that begins in one culture and is brought to another, the hummus in Antakya has taken on its own style and become a truly different and delicious experience.  For example, you can find it for breakfast doused heavily in olive oil and pickles.  Yes, pickles!  Pickles, or in Turkish turşu, are a popular part of Turkish cuisine, usually served with salads or sometimes served with rice-but in Antakya, you get your hummus with pickles.  I have to say, the ‘brine-y’ sourness added from the vinegar really lightens up the richness of the hummus giving it a very refreshing quality.  For dinner, you can find hummus on the menu again-but being as it’s night-time and you might want something heartier, it’s served with melted butter and cooked in the oven.  Nope, I am not making this up!  They pour melted butter with toasted pine nuts over hot hummus, bake it in the oven so that the edges get a little crispy, and serve this with bread!  It is rich and warm and gooey and salty -a sinful side of heaven!

When you visit Antakya, you will walk along streets laid down by Romans, you will see mosques, churches and synagogues all sitting peacefully side by side, and you will eat amazing food.  You will meet some of the friendliest people who can’t wait to share their culture with you, as the city is accepting and inviting. It’s a continual melting pot of history and modernity with cultures coming together to share in traditions.  Hummus is itself an important food across the entire Middle Eastern region, with each culture having their own particular way they feel it’s best made.  Here in this part of Turkey is yet another example of this food that spans cultures and puts its own twist on this Middle Eastern staple.

**Continue reading for a recipe and pictures of the process and as always, Afiyet Olsun!**

Hummus How-To: This is something I kind of taught myself how to make and again, I asked a lot of people for advice.  My best friend’s mom has an awesome hummus recipe that she got from her friend who is Lebanese.  I used that recipe for years before trying to copy the style I had eaten in Antakya.  In her recipe, she used canned chickpeas, but her secret was to save the liquid from the cans and to incorporate this into the hummus.  My mom also always told me to add a pinch of baking soda to anything that could be …well… gaseous.  If you are cooking cabbage or collard greens, throw in baking soda.  The same is true when you soak beans!  The hummus in Antakya is extra crazy smooth and also it has lots of tahini in it.  There are so many hummus recipes out there in the world and many ways to make it that are easier…but I like it this way, so I’m sharing.

Ingredients:
* half a bag of dried chickpeas
* 4 Tablespoons Tahini paste
* 1 teaspoon salt
* 1 teaspoon ground cumin
* 3 cloves fresh garlic
* 1-2 cups of liquid that you cooked the chickpeas in (don’t pout it down the sink!)
*1 lemon
*red pepper flakes, and good quality olive oil to spread on top 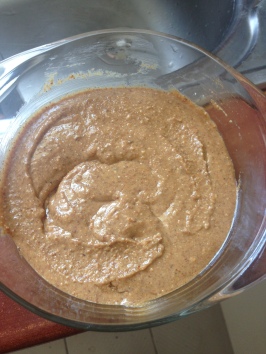 OK, so first you have to deal with your chickpeas.  Soak them in a bowl overnight with 1 teaspoon of baking soda added to the water.  Rinse them the next morning and cook them- you just want to simmer them on low heat until they are tender (1 hour).  They should be squishy.  Drain them, let them cool… and peel them.  Oops, yes, I said that… to get them smooth, you have to peel them.  It’s totally annoying, I know… but it’s worth it!  I asked many people and they all agreed…you have to squish the chickpeas out of the white skin.  Once they are peeled (you should have at this point 5 cups of peeled chickpeas), start pureeing them in a food processor.  Add the garlic, salt, cumin, tahini, and the juice of the lemon.  Now, start adding in the reserved cooking liquid.  You want to add enough so that it’s watery.  Don’t be afraid- it will thicken with time so you should get it pretty thin while blending.  Pour it into a dish, spoon olive oil and red pepper flakes on top and stick it in the fridge (if you can wait!) to cool for a bit.  If you want to ‘do as the Antakyans do’ so to speak, you can bake your hummus in the oven until the edges crisp and pour butter on top!  Enjoy! 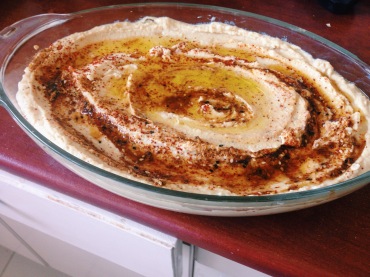 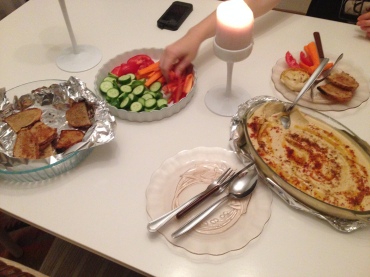