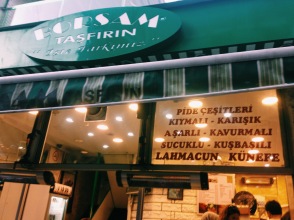 Before I took the plunge and decided to move to Istanbul I was just a normal tourist.  My best friend and I had come here on a 2 week vacation while teaching at summer camps in Italy and therefore we were on a pretty tight budget.  We survived mostly off of cheap street food through the long days trekking around all the museums and historical sites. It was in this way, exhausted and hungry and desperate for something quick and cheap, that I first encountered lahmacun, pronounced “la-ma-joon”.  I still remember the very moment that I ate it, a memory which connects me both to food and that beautiful time when I was discovering the city for the first time-an experience which ultimately lead to me moving across the world.  That very first lahmacun was at a touristy place in Sultanahmet near the Hagia Sophia, and my friend and I were ravenous after spending all day walking in the sun.  Did I mention that this was in July?   I remember we saw a place with tables outside and fans hung up on the ceiling blowing a breeze down below.  The people were eating a round crunchy bread with meat on top which drew us in.  We looked at the menu and each crunchy bread was only 4 Turkish Lira.  Sold!  I think we each ordered 3 and ate them in seconds.

I loved lahmacun the first time I ate it and I still love it. It’s one of my most favorite foods, not just to eat in Turkey, but of all time.  Who on Earth doesn’t love a crunchy bread smothered in spicy ground meat that is both crispy and also chewy simultaneously?  OK, well maybe a vegetarian but then it’s their loss. Lahmacun is both hearty and  savory and refreshing and light at the same time. It’s also a good fast food and very affordable. The actual origins of lahmacun seem to be a bit controversial with many different cultures claiming to have invented it much like hummus and it is found throughout the Middle East.

So, what exactly is it? Well that’s an interesting question as if you look in guide books or plug it into the internet you might get lots of results calling it a ‘Turkish pizza’…but it’s not really a pizza. The only way in that this comparison even comes close to being true is that Neapolitan pizza began as a cheap street food that was made in a circle and then for convenience of eating, folded over in half in to eat.  Lahmacun is a street food and it is round, but it’s not eaten like a pizza.  Lahmacun is a flatbread, baked on a stone in a wood fired brick oven. It’s super thin and crispy, sometimes as thin as a sheet of paper, with crunchy oven- charred blisters on the skin of it. The topping is a ground meat mixture, using either beef or lamb, with various spices such as peppers, onions, and garlic. There’s no tomato sauce and there’s no cheese covering it. It’s served with “yeşilik” (parsley, lettuce), onions, and tomatoes and a lemon wedge. You can dress your lahmacun however you like it and then… yes, this is the magical part… you ROLL it up! So in one mouthful you get an equal layer of crispy crunchy crust mixing with the spicy meat and fresh greens all coming together in one of the most beautiful bites you will ever take….I promise.

Over the years I’ve discovered my favorite spots for what I consider to be the best lahmacun, but very recently I tried one from a new place that was kind of a game-changer. Now I am torn between my all-time favorite and the new one. So for the past 2 weeks I have been taste testing. Yes, I am actually that intensely interested in being able to finalize my decision that I have been eating in order to figure out this perplexing situation.

Borsam Lahmacun, in the heart of Kadıköy, is a long beloved favorite amoung many residents. I also love their lahmacun, however to be honest I find that these days I enjoy it more for the ambiance. You can sit on the street and people watch or watch the guys at the oven making and loading in the lahmacun to bake. As delicious as it is, it’s my 3rd favorite. Now-for the battle between 2nd and 1st place. My all time number one is from a restaurant serving up mainly ‘Antep’ cuisine, meaning food using traditional methods from Gaziantep. That place is called ‘Dürümcü Emmi’ located again in Kadıköy, and is one of the best places to eat in Istanbul. Although they are famous for kebabs, their lahmacun is to die for…that is until it tried the ‘Özel Lahmacun” at my neighborhood pide place, ‘Pidene’m’. “Özel” means special, and it’s 2 TL more expensive than just their normal lahmacun. After eating it, I understood why they call it özel! It is truly a work of art.

Pidene’m’s  Özel Lahmacun‘s flavor is intense and their meat mixture is very red in color due to cooking down the meat and spices in tomato paste.  They also use veal as their meat, which creates the silky richness.   In addition to this, they also use a hearty helping of chopped walnuts in meat mixture.  If you look closely, you can actually see huge halves of walnuts on top of the bread. There’s a good bit of garlic and onion going on in this lahmacun recipe too. This version is a much heavier and savory style of flat bread.

Dürümcü Emmi’s lahmacun has a kind of tangy-ness to it and you can see the flecks of red and green peppers ground into the meat mixture. It has a good bit of heat to it.  Instead of walnuts, it has pistachios ground into the meat. I also have a strong suspicion that there is some form of pomegranate on these lahmacun’s in possibly the form of the nar ekşisi sos which I’ve mentioned before. Their lahmacuns have a sweetness to them and coupled with the lemon juice you add yourself they have a sweet and sour feel to them.

So, which one is the best?  I still don’t know.  They are both equally good because although they are the same food and cooked using the same traditional methods, they are totally different from each other.  It depends on what you are in the mood for.  If you want light, fresh, and fruity then Dürümcü Emmi is your pick.  If you want something heavier and richer to fill you up, then you should go with Pidene’m.  Sometimes, as much as you try, you don’t have to have a favorite, you just have to really enjoy the options that surround you.